As we approach the end of the year, it is always fun to look back on all of the beautiful science that Hubble has produced within the last twelve months. 2017 has been a very productive scientific year for our (still) favourite telescope. As of December 20, 775 refereed papers based on Hubble data were published in 2017!

As always, we rejoice to see the strong involvement of ESA Member States astronomers in the exploitation and dissemination of Hubble science data: 38% of the total Hubble papers in 2017 were authored by scientists from ESA Members States. Germany wins the prize this year for the highest number of Hubble-related publications, closely followed by the UK, and then Italy, France, Spain, the Netherlands, Sweden and many others. This is a lot of published science, but what were the hot science topics of 2017?

I think that we all agree that the advent of multi-messenger astronomy has created a true paradigm shift in the way astronomy is done, advertised and perceived. The intense collaboration of more than 40 facilities, both on the ground and in space, in pinning down the origin of a gravitational wave alert, has taken the community and the public by storm. No wonder that two papers related to Hubble’s observations of the binary neutron star merger are among the hottest trending papers this year, clocking citations at a very fast pace.

All other papers in the “top ten trending” category, defined as the ten papers with the most citations, are related to cosmology, and are associated either with the Hubble Deep Fields or the Frontier Fields, especially in synergy with other observatories (for example, Chandra or ALMA). This overall trend is broadly matched if we consider the “top ten trending” papers authored by European scientists. However, there are some interesting outliers, including a very interesting paper presenting the GAIA catalogue validation, which is receiving wide attention. We expect to see many more highly cited Hubble-GAIA papers in the future, especially after the GAIA Data Release 2, scheduled for April 2018.

Finally, just for fun, we checked which of the Hubble results this year most resonated with the public. Among the various metrics we use, a reliable indicator is Meltwater. It provides a detailed feedback on the number of articles — so called press clippings — from news agencies all over the world that are based on published press releases. No surprise here either. By far, the highest public impact was — again — the identification of the optical counterpart of gravitational waves with 3180 press clippings. Beside that, images of and news about Solar System objects (Jupiter 472 press clippings; story about the cometary asteroid 219 press clippings) and deep field observations (the last Frontier Fields was covered 143 times) continue to grab the attention of the public and the press. Also news on exoplanets are of great interest for the public — this year news around TRAPPIST-1 saw 332 press clippings.

For yet another year, we can definitely conclude that Hubble rocks! 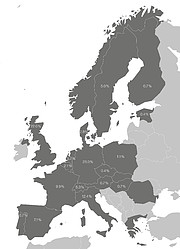