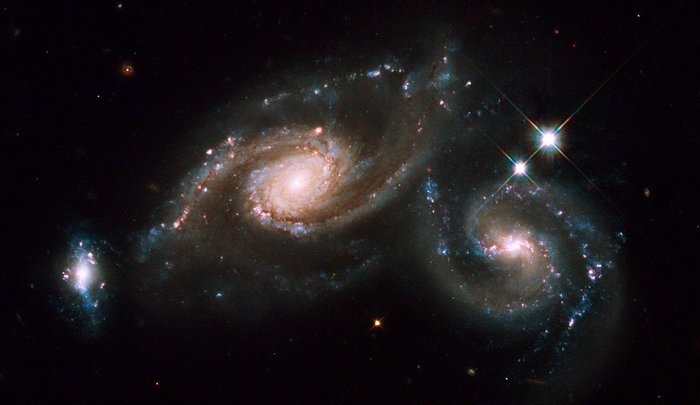 In celebration of the International Year of Astronomy 2009, the NASA/ESA Hubble Space Telescope photographed the winning target in the Space Telescope Science Institute's "You Decide" competition. The image of the winner, a group of interacting galaxies called Arp 274, was revealed during ESO's "Around the World in 80 Telescopes" webcast. The striking object received 67,021 votes out of the nearly 140,000 votes cast for the six candidate targets.

On 1-2 April Hubble's Wide Field Planetary Camera 2 captured Arp 274 (also known as NGC 5679). Arp 274 is a system of three galaxies that appear to be partially overlapping in the image, although they may be at somewhat different distances. The spiral shapes of two of these galaxies appear mostly intact. The third galaxy (far left) is more compact, but shows evidence of star formation.

Two of the three galaxies are forming new stars at a high rate. This is evident in the bright blue knots of star formation that are strung along the arms of the galaxy on the right and along the small galaxy on the left.

The largest component is located in the middle of the three. It appears as a spiral galaxy, which may be barred. The entire system resides at about 400 million light-years away from Earth in the constellation Virgo.

Hubble's Wide Field Planetary Camera 2 was used to image Arp 274. Blue, yellow and infrared filters were combined with a filter that isolates hydrogen emission. The colours in this image reflect the intrinsic colour of the different stellar populations that make up the galaxies. Yellowish older stars can be seen in the central bulge of each galaxy. A bright central cluster of stars pinpoint each nucleus. Younger blue stars trace the spiral arms, along with pinkish nebulae that are illuminated by new star formation. Interstellar dust is silhouetted against the starry population. The pair of foreground stars on the right are inside our own Milky Way.

The International Year of Astronomy 2009 is the celebration of the 400th anniversary of Galileo's first observations with a telescope. People around the world are coming together to participate in the IYA's 100 Hours of Astronomy, 2 April to 5 April. This global astronomy event is geared toward encouraging as many people as possible to experience the night sky.

STScI is an International Year of Astronomy 2009 programme partner. The IYA2009 secretariat is located at ESO headquarters in Garching, Germany.