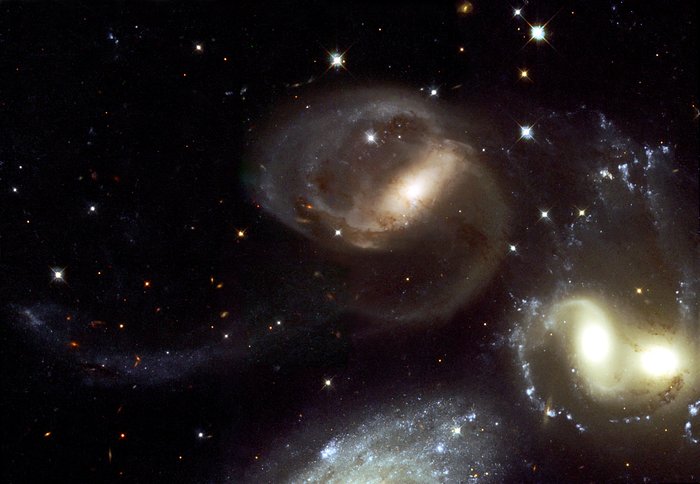 This spectacular new image from the NASA/ESA Hubble Space Telescope of the group of galaxies called Stephan's Quintet has provided a detailed view of one of the most exciting star forming regions in the local Universe. Stephan's Quintet is a favoured object for amateur astronomers and has earned a reputation as a challenging target for good hobby telescopes. The quintet is a prototype of a class of objects known as compact groups of galaxies and has been studied intensively for decades. This NASA/ESA Hubble Space Telescope image is a close-up view of the central part of Stephan's Quintet, giving a magnificent view of a gigantic cosmic collision. Weird, highly distorted features, dust lanes crossing between galaxies and long filaments of stars and gas extending far beyond the central regions all suggest galaxies twisted by violent encounters. The galaxies float through space, distorted shapes moulded by tidal interactions, weaving together in the intricate figures of an immense cosmic dance, choreographed by gravity. This image comes from the large archive of scientific observations performed with the Hubble Space Telescope. It is a mosaic of two pointings with the WFPC2 instrument made in December 1998 and June 1999. The natural-colour composite has been constructed by the Hubble European Space Agency Information Centre from individual exposures in red light (814W filter, 2000 seconds), in green light (569W filter, 3200 seconds) and in blue light (450W filter, 6800 seconds). The image measures 3.7 x 2.5 arc-minute