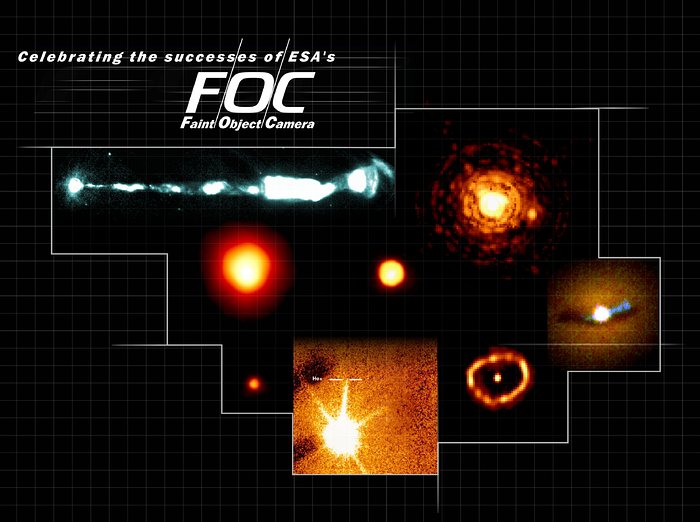 This collage shows some of the scientific successes of ESAs Faint Object Camera. The foremost scientific capability of the FOC was its ultra-sharp images. The superb FOC image quality was put to use in providing unique close-up views of nearly every class of astronomical object, some of which are seen here. In order from top and clockwise:

With FOC, astronomers discovered the motion of the jet protruding from the galaxy M87. The galaxy is at a distance of 45 million light years and FOC observations of the jet over a number of years allowed detection and measurement of the motion of knots in the jet. These move at speeds almost equal to the speed of light. The FOC measurements have been a key element in the development of physical models for this impressive phenomenon.

This FOC image of the innermost part of the active galaxy NGC 6251 exposed for the first time the environment very close to a black hole. In the image a warped dust ring is seen bathed in blazing ultraviolet light (blue) from the black hole.

This FOC picture is a close-up of the nova called Cygni 1992. The star erupted in 1992 and FOC revealed an expanding ring outlining the edge of a bubble of hot gas blasted into space by the nova.

FOC's special ability to detect the very faintest ultraviolet light was extensively used to make spectra of very distant quasars. An effort that ultimately resulted in the first detection of singly ionised helium in the medium between the galaxies. This was characterized by scientists as a breakthrough in cosmology.

Pluto and its moon Charon (7 o'clock)

This FOC image taken in 1994 gave at the time the clearest view of our Solar System's most distant planet Pluto (large orange disk) and its moon Charon (small orange disk). The image also revealed surface details on Pluto for the first time.

The first image of the atmosphere of a star (9 o'clock)

The star Betelgeuze is seen here in a very high magnification view made possible by ESA's FOC. For the first time it was possible to see details in the atmosphere in a star outside our Solar System.