Scale and compass image for dark spot on Neptune 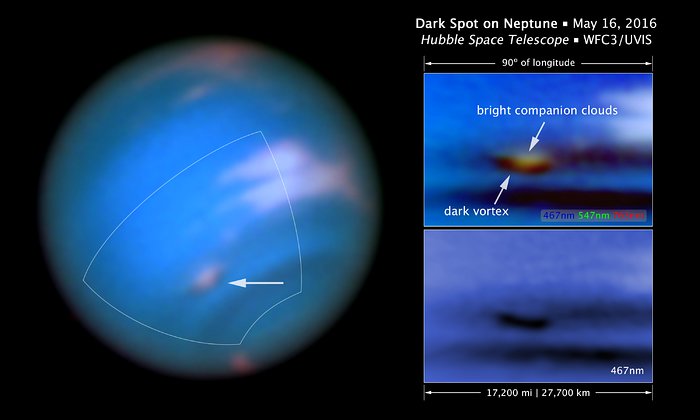 This new image taken with the NASA/ESA Hubble Space Telescope confirms the presence of a dark vortex in the atmosphere of Neptune. The full visible-light image at left shows that the dark feature resides near and below a patch of bright clouds in the planet's southern hemisphere. The dark spot measures roughly 4,800 kilometers across. Other high-altitude clouds can be seen at the planet's equatorial region and polar regions.

The full-colour image at top right is a close-up of the complex feature. Pancake-shaped clouds above the spot form when ambient air is perturbed and diverted upward over the vortex. The vortex is a high-pressure system.

The image at bottom right shows that the vortex is best seen at blue wavelengths. Only Hubble has the high resolution required for identifying such weather features on distant Neptune.

Though similar features were seen during the Voyager 2 flyby of Neptune in 1989 and by Hubble in 1994, this vortex is the first one observed on the planet in the 21st century. In September 2015, the Outer Planet Atmospheres Legacy (OPAL) program, a long-term Hubble Space Telescope project that annually captures global maps of the outer planets, revealed a dark spot close to the location of the bright clouds, which had been tracked from the ground. By viewing the vortex a second time, the new Hubble images, taken by Wide Field Camera 3 on May 16, 2016, confirm that OPAL really detected a long-lived feature. With the new data, the team created a higher-quality map of the vortex and its surroundings.