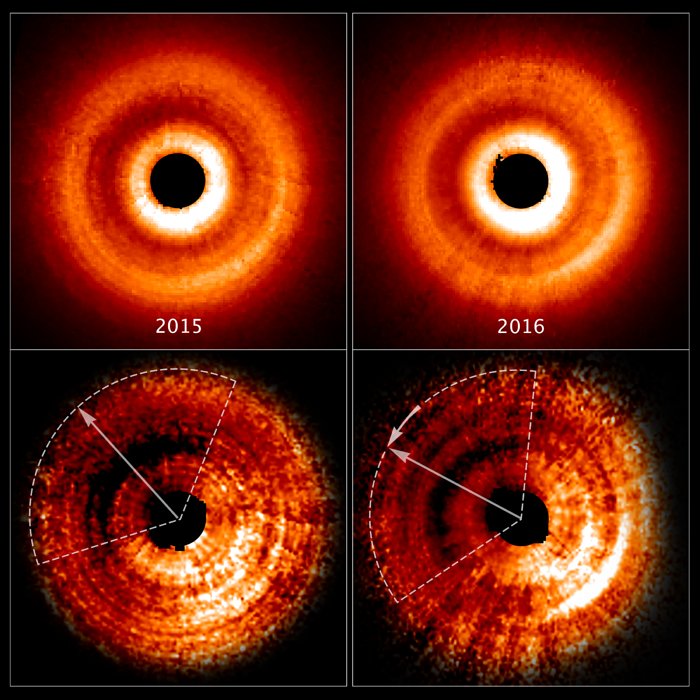 These images, taken a year apart by the NASA/ESA Hubble Space Telescope, reveal a shadow moving counterclockwise around a gas and dust disc encircling the young star TW Hydrae.

The two images at the top, taken by the Space Telescope Imaging Spectrograph, show an uneven brightness across the disc. Through enhanced image processing (images at bottom), the darkening becomes even more apparent. These enhanced images allowed astronomers to determine the reason for the changes in brightness.

The dimmer areas of the disc (top left) are caused by a shadow spreading across the outer disc. The dotted lines approximate the shadow's coverage. The long arrows show how far the shadow has moved in a year (from 2015-2016), which is roughly 20 degrees.

Based on Hubble archival data, astronomers determined that the shadow completes a rotation around the central star every 16 years. They know the feature is a shadow because dust and gas in the disc do not orbit the star nearly that quickly. So, the feature must not be part of the physical disc.

The shadow may be caused by the gravitational effect of an unseen planet orbiting close to the star. The planet pulls up material from the main disc, creating a warped inner disc. The twisted disc blocks light from the star and casts a shadow onto the disc's outer region.