Schematic of comet C/2017 K2's approach to the Solar System 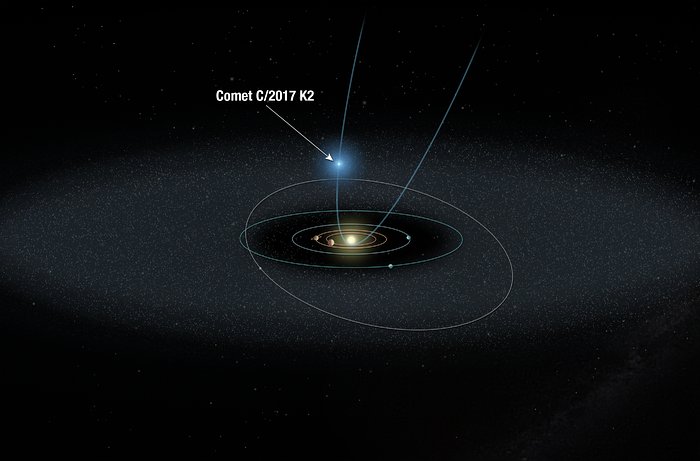 This illustration shows the orbit of comet C/2017 K2 PANSTARRS (K2) on its maiden voyage into the solar system. The Hubble Space Telescope observed K2 when it was over 2.4 billion kilometres from the Sun, halfway between the orbits of Saturn and Uranus. The observations revealed a fuzzy cloud of dust, called a coma, surrounding the icy visitor, evidence that the frozen comet is being warmed by the Sun and releasing material. K2 is the farthest active inbound comet ever observed. K2 has been traveling toward the Sun for millions of years from its home in the Oort Cloud, a spherical region at the edge of our solar system. The graphic shows the comet in its inbound journey, high above the plane of the major planets' orbits. The orbits of the giant planets, from Jupiter to Neptune, are also shown in the diagram. The farthest object from the Sun depicted here is the dwarf planet Pluto, which resides in the Kuiper Belt, a vast rim of primordial debris encircling our solar system.