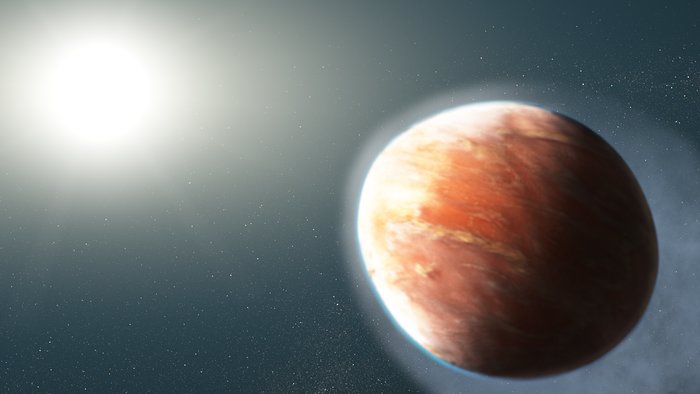 This artist's illustration shows an alien world that is losing magnesium and iron gas from its atmosphere. The observations represent the first time that so-called "heavy metals" — elements more massive than hydrogen and helium — have been detected escaping from a hot Jupiter, a large gaseous exoplanet orbiting very close to its star.

The planet, known as WASP-121b, orbits a star brighter and hotter than the Sun. The planet is so dangerously close to its star that its upper atmosphere reaches a blazing 4,600 degrees Fahrenheit, about 10 times greater than any known planetary atmosphere. A torrent of ultraviolet light from the host star is heating the planet's upper atmosphere, which is causing the magnesium and iron gas to escape into space. Observations by Hubble's Space Telescope Imaging Spectrograph have detected the spectral signatures of magnesium and iron far away from the planet.

The planet's "hugging" distance from the star means that it is on the verge of being ripped apart by the star's gravitational tidal forces. The powerful gravitational forces have altered the planet's shape so that it appears more football shaped.