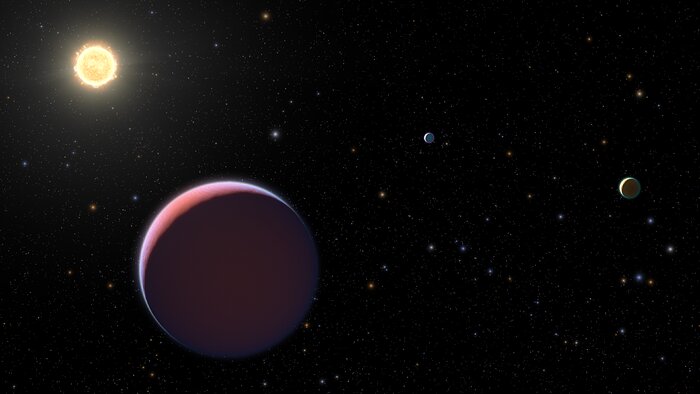 New observations from the NASA/ESA Hubble Space Telescope have provided the first spectroscopic observations of two of these super-puffy planets, which are located in the Kepler-51 system.

The recent Hubble observations allowed a team of astronomers to refine the mass and size estimates for these worlds – independently confirming their “puffy” nature. Though no more than several times the mass of Earth, their hydrogen/helium atmospheres are so bloated they are nearly the size of Jupiter. In other words, these planets might look as big and bulky as Jupiter, but are roughly 1/100th the mass of Jupiter.

How and why their atmospheres balloon outwards remains unknown, but this feature makes super-puffs prime targets for atmospheric investigation. Using Hubble, the team went looking for evidence of components, notably water, in the atmospheres of Kepler-51b and 51d. Hubble observed the planets when they passed in front of their star, aiming to observe the infrared color of their sunsets. Astronomers deduced the amount of light absorbed by the atmosphere across a range of infrared light wavelengths, thus creating a spectrum for each planet in hopes of seeing the telltale signs of constituents like water in the features of the spectra.

The team concluded that the low densities of these planets are in part a consequence of the young age of the system, a mere 500 million years old. Models suggest these planets formed outside of the star’s “snow line” where icy materials can survive. The planets then migrated inward, like a string of railroad cars.