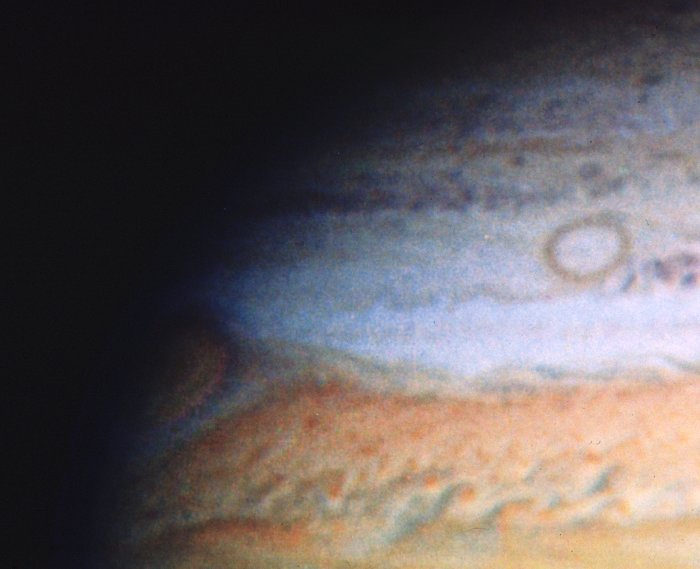 On March 11, 1991, the Wide Field/planetary Camera on NASA/ESA Hubble Space Telescope observed Jupiter for the first time. This "true color" picture of the southeast quadrant of the planet shows a striking oval-shaped dark ring on the left and the Great Red Spot just rotating out of view on the right aide. These features are thought to be very large hurricane-like structures where warmer gases carry ammonia ice crystals from deep in the Jovian atmosphere up above the top of the normal cloud layers that shroud Jupiter. Jovian clouds are thought to be colored by small amounts of sulfur, phosphorus and carbon compounds in the ice crystals. This picture has about the same resolution (0.15 arcsec) as voyager pictures taken 5 days before encounter in 1979 . This will allow a continuation of the study of Jovian wind velocities begun by voyager and allow expansion of this program into the ultraviolet and infrared where clouds form at different heights in the atmosphere.

The blue and blue-green bands to the right of the edge of Jupiter are artifacts due to the rotation of the planet during the six minutes between the separate blue, green and red exposures used to make the colour picture.