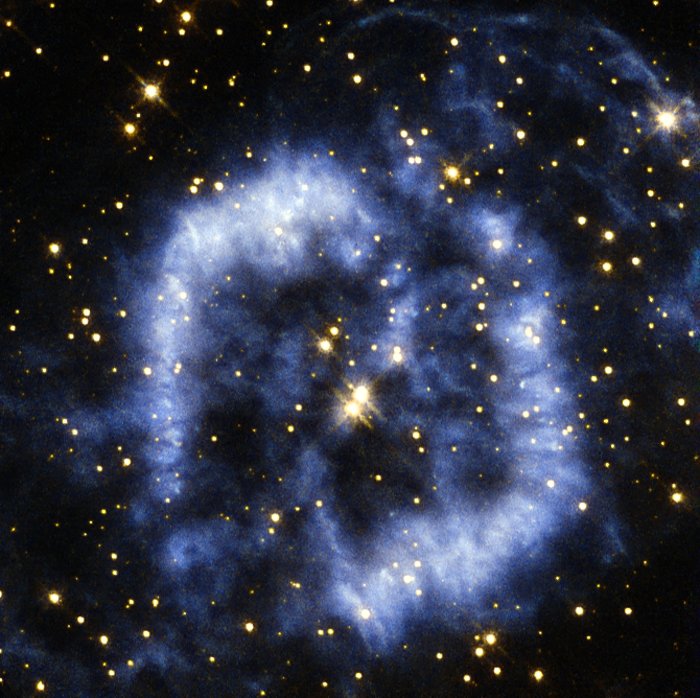 This planetary nebula is called PK 329-02.2 and is located in the constellation of Norma in the southern sky. It is also sometimes referred to as Menzel 2, or Mz 2, named after the astronomer Donald Menzel who discovered the nebula in 1922.

When stars that are around the mass of the Sun reach their final stages of life, they shed their outer layers into space, which appear as glowing clouds of gas called planetary nebulae. The ejection of mass in stellar burnout is irregular and not symmetrical, so that planetary nebulae can have very complex shapes. In the case of Menzel 2 the nebula forms a winding blue cloud that perfectly aligns with two stars at its centre. In 1999 astronomers discovered that the star at the upper right is in fact the central star of the nebula, and the star to the lower left is probably a true physical companion of the central star.

For tens of thousands of years the stellar core will be cocooned in spectacular clouds of gas and then, over a period of a few thousand years, the gas will fade away into the depths of the Universe. The curving structure of Menzel 2 resembles a last goodbye before the star reaches its final stage of retirement as a white dwarf.

A version of this image was entered into the Hubble's Hidden Treasures image processing competition by contestant Serge Meunier.