A diamond in the dust 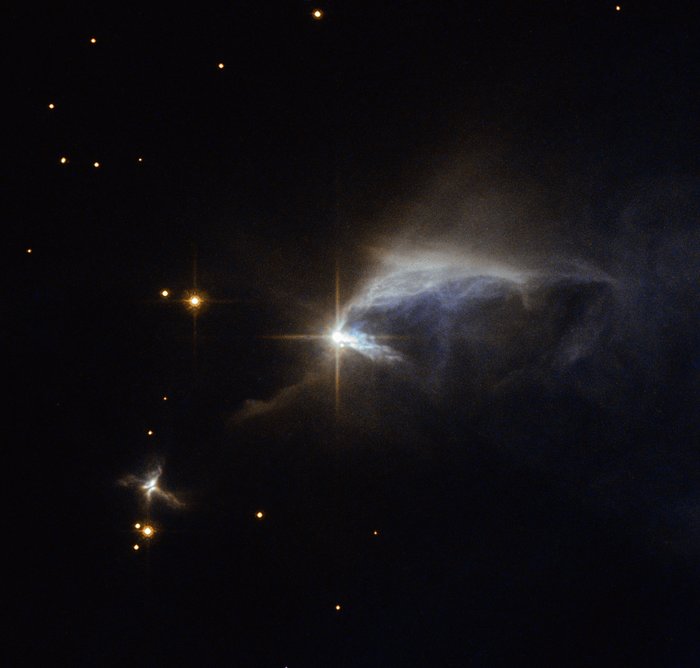 Surrounded by an envelope of dust, the subject of this NASA/ESA Hubble Space Telescope image is a young pre-main-sequence star known as HBC 1. The star is in an immature and adolescent phase of life, hence its classification — most of a Sun-like star’s life is spent in a stage comparable to human adulthood dubbed the main sequence.

In this view, HBC 1 illuminates a wispy reflection nebula known as IRAS 00044+6521. Formed from clouds of interstellar dust, reflection nebulae do not emit any visible light of their own and instead — like fog encompassing a lamppost — shine via the light from the stars embedded within. Though nearby stars cannot ionise the nebula’s non-gaseous contents, as with brighter emission nebulae, scattered starlight can make the dust visible.

What makes this seemingly ordinary reflection nebula more interesting are three nearby Herbig–Haro objects known as HH 943, HH 943B and HH 943A — which are not visible in this image — located within IRAS 00044+6521 itself. Herbig–Haro objects are small patches of dust, hydrogen, helium and other gases that form when narrow jets of gas ejected by young stars such as HBC 1 collide with clouds of gas and dust. Lasting just a few thousand years, these objects rapidly move away from their parent star before dissipating into space.