The NASA/ESA Hubble Space Telescope has captured a new image of the galaxy NGC 1132 which is, most likely, a cosmic fossil -- the aftermath of an enormous multi-galactic pile-up, where the carnage of collision after collision has built up a brilliant but fuzzy giant elliptical galaxy far outshining typical galaxies.

The elliptical galaxy NGC 1132, seen in this latest image from Hubble, belongs to a category of galaxies called giant ellipticals. NGC 1132, together with the small dwarf galaxies surrounding it, are dubbed a "fossil group" as they are most likely the remains of a group of galaxies that merged together in the recent past.

In visible light NGC 1132 appears as a single, isolated, giant elliptical galaxy, but this is only the tip of the iceberg. Scientists have found that NGC 1132 resides in an enormous halo of dark matter, comparable to the amount of dark matter usually found in an entire group of tens or hundreds of galaxies. It also has a strong X-ray glow from an abundant amount of hot gas -- an amount normally only found in galaxy groups. Its X-ray glow extends over a region of space ten times larger than the 120,000 light-year radius it has in visible light. An X-ray glow that is equal in size to that of an entire group of galaxies.

The origin of fossil group systems remains a puzzle. The most likely explanation is that they are the end-products of a cosmic feeding frenzy in which a large cannibal galaxy devours all of its neighbours. A less likely explanation is that they may be very rare objects that formed in a region or period of time where the growth of moderate-sized galaxies was somehow suppressed, and only one large galaxy formed.

Many galaxies reside in groups that are gravitationally bound together, including our own Milky Way, which is part of the Local Group. Sometimes gravity makes galaxies collide and eventually merge into one single galaxy. There is strong evidence that the Milky Way is one such cannibal that has snacked on numerous smaller galaxies during its lifetime, inheriting their stars in the process. Scientists are keenly studying the environment surrounding galaxies such as NGC 1132 using space telescopes like Hubble, and they try to trace the history of the formation these galaxies by analysing their properties.

In this Hubble image, NGC 1132 is seen surrounded by thousands of ancient globular clusters, swarming around the galaxy like bees around a hive. These globular clusters are likely to be the survivors of the disruption of their cannibalised parent galaxies that have been eaten by NGC 1132 and may reveal its merger history. In the background, there is a stunning tapestry of numerous galaxies that are much further away.

Elliptical galaxies are smooth and featureless. They contain hundreds of millions to trillions of stars, and their shapes range from nearly spherical to very elongated in shape. Their overall yellowish colour is a telltale sign of their great age. Because elliptical galaxies do not contain much cool gas they can no longer make new stars.

NGC 1132 is located approximately 320 million light-years away in the constellation of Eridanus, the River. This image of NGC 1132 was taken with Hubble's Advanced Camera for Surveys. Data obtained in 2005 and 2006 through green and near-infrared filters were used to produce a colour composite. 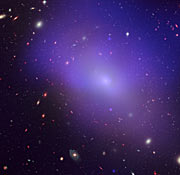 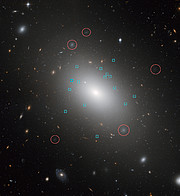 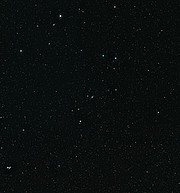 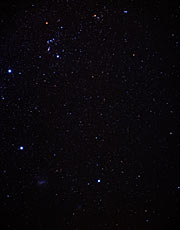