The NASA/ESA Hubble Space Telescope has identified thousands of more than 5 billion year-old globular clusters in the Virgo cluster of galaxies. One of the results of these discoveries led astronomers to understand more about the life and evolution of cannibal galaxies.

Globular star clusters, dense bunches of hundreds of thousands of stars, contain some of the oldest surviving stars in the Universe. A new international study of globular clusters outside our Milky Way Galaxy has found evidence that these hardy pioneers are more likely to form in dense areas, where star birth occurs at a rapid rate, instead of uniformly from galaxy to galaxy.

Astronomers used the NASA/ESA Hubble Space Telescope to identify over 11 000 globular clusters in the Virgo cluster of galaxies, most of which are more than 5 billion years old. Comprised of over 2 000 galaxies, the Virgo cluster is located about 54 million light-years away and is the nearest large galaxy cluster to Earth. Along with Virgo, the sharp vision of Hubble's Advanced Camera for Surveys (ACS) resolved the star clusters in 100 galaxies of various sizes, shapes, and brightness - even in faint, dwarf galaxies.

"It's hard to distinguish globular clusters from stars and galaxies using ground-based telescopes", explained Eric Peng of Peking University in Beijing, China, and lead author of the Hubble study.

Hubble's "eye" is so sharp that it was able to pick out the fuzzy globular clusters from stars in our galaxy and from faraway galaxies in the background. "With Hubble we were able to identify and study about 90 percent of the globular clusters in all our observed fields. This was crucial for dwarf galaxies that have only a handful of star clusters".

The team found a bounty of globular clusters (from a few dozen to several dozen) in most of the dwarf galaxies within 3 million light-years of the cluster's centre. This happens to be the same region where the giant elliptical galaxy Messier 87 resides. These numbers were surprisingly high considering the low masses of the dwarfs they inhabited. By contrast, dwarfs in the outskirts of the cluster had fewer globulars.

"Our study shows that the efficiency of star cluster formation depends on the environment", said Patrick Cote of the Herzberg Institute of Astrophysics in Victoria, Canada. "Dwarf galaxies closest to Virgo's crowded centre contained more globular clusters than those farther away".

Astronomers have long known that the giant elliptical galaxy at the cluster's centre, Messier 87, also hosts a larger than predicted population of globular star clusters. However, the origin of so many globulars has been a long-standing mystery. Astronomers have theorised that many of the clusters may have been snatched from smaller galaxies that ventured too close to it.

"We found few or no globular clusters in galaxies within 130 000 light-years from Messier 87, suggesting the giant galaxy stripped the smaller ones of their star clusters", Peng said. "These smaller galaxies are contributing to the buildup of Messier 87".

Evidence of Messier 87's galactic cannibalism comes from an analysis of the globular clusters' composition. "In Messier 87 there are three times as many globulars deficient in heavy elements, such as iron, than globulars rich in those elements", Peng said. "This suggests that many of these 'metal-poor' star clusters may have been stolen from nearby dwarf galaxies, which also contain globulars deficient in heavy elements".

Studying globular star clusters is critical to understanding the early, intense star-forming episodes that mark galaxy formation. They are known to reside in all but the faintest of galaxies.

"Star formation near the core of Virgo is very intense and occurs in a small volume over a short amount of time", Peng noted. "It may be more rapid and more efficient than star formation in the outskirts. The high star-formation rate may be driven by the gravitational collapse of dark matter, an invisible form of matter, which is denser and collapses sooner near the cluster's centre. Messier 87 sits at the centre of a large concentration of dark matter, and all of these globulars near the centre probably formed early in the history of the Virgo cluster."

The astronomers also obtained accurate distances to 84 of the 100 galaxies in the Hubble study.

The results appeared on 1 July 2008 in The Astrophysical Journal. 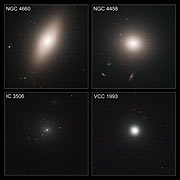 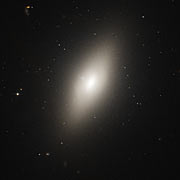 PR Image heic0815b
NGC 4660 in the Virgo cluster of galaxies 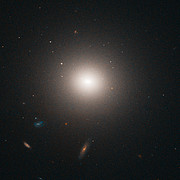 PR Image heic0815c
NGC 4458 in the Virgo cluster of galaxies 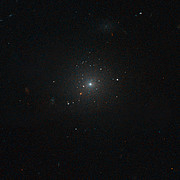 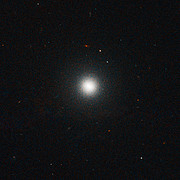 PR Image heic0815e
VCC 1993 in the Virgo cluster of galaxies 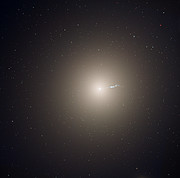 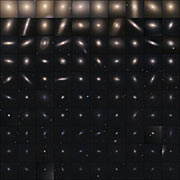 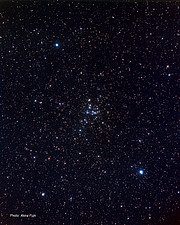 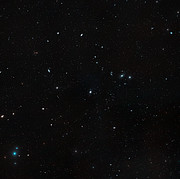 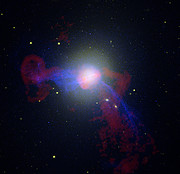