Dark matter even darker than once thought

Hubble explores the dark side of cosmic collisions

Astronomers using observations from the NASA/ESA Hubble Space Telescope and NASA’s Chandra X-ray Observatory have studied how dark matter in clusters of galaxies behaves when the clusters collide. The results, published in the journal Science on 27 March 2015, show that dark matter interacts with itself even less than previously thought, and narrows down the options for what this mysterious substance might be.

Dark matter is a giant question mark looming over our knowledge of the Universe. There is more dark matter in the Universe than visible matter, but it is extremely elusive; it does not reflect, absorb or emit light, making it invisible. Because of this, it is only known to exist via its gravitational effects on the visible Universe (see e.g. heic1215a).

To learn more about this mysterious substance, researchers can study it in a way similar to experiments on visible matter — by watching what happens when it bumps into things [1]. For this reason, researchers look at vast collections of galaxies, called galaxy clusters, where collisions involving dark matter happen naturally and where it exists in vast enough quantities to see the effects of collisions [2].

Galaxies are made of three main ingredients: stars, clouds of gas and dark matter. During collisions, the clouds of gas spread throughout the galaxies crash into each other and slow down or stop. The stars are much less affected by the drag from the gas [3] and, because of the huge gaps between them, do not have a slowing effect on each other — though if two stars did collide the frictional forces would be huge.

"We know how gas and stars react to these cosmic crashes and where they emerge from the wreckage. Comparing how dark matter behaves can help us to narrow down what it actually is," explains David Harvey of the École Polytechnique Fédérale de Lausanne (EPFL) in Switzerland, lead author of a new study.

Harvey and his team used data from the NASA/ESA Hubble Space Telescope and NASA's Chandra X-ray Observatory to study 72 large cluster collisions. The collisions happened at different times, and are seen from different angles — some from the side, and others head-on [4].

"A previous study had seen similar behaviour in the Bullet Cluster," says team member Richard Massey of Durham University, UK. "But it's difficult to interpret what you're seeing if you have just one example. Each collision takes hundreds of millions of years, so in a human lifetime we only get to see one freeze-frame from a single camera angle. Now that we have studied so many more collisions, we can start to piece together the full movie and better understand what is going on."

By finding that dark matter interacts with itself even less than previously thought, the team have successfully narrowed down the properties of dark matter. Particle physics theorists have to keep looking, but they now have a smaller set of unknowns to work with when building their models[5].

To further increase the number of collisions that can be studied, the team are also looking to study collisions involving individual galaxies, which are much more common.

"There are still several viable candidates for dark matter, so the game is not over, but we are getting nearer to an answer," concludes Harvey. "These 'Astronomically Large' particle colliders are finally letting us glimpse the dark world all around us but just out of reach."

[1] On Earth scientists use particle accelerators to find out more about the properties of different particles. Physicists can investigate what substances are made of by accelerating particles into a collision, and examining the properties and trajectory of the resulting debris.

[2] Clusters of galaxies are a swarm of galaxies permeated by a sea of hot X-ray emitting ionised hydrogen gas that is all embedded in a massive cloud of dark matter. It is the interactions of these, the most massive structures in the Universe that are observed to test dark matter’s properties.

[3] The gas-gas interaction in cluster collisions is very strong, while the gas-star drag is weak. In a similar way to a soap bubble and a bullet in the wind where the bubble would interact a great deal more with the wind than the bullet.

[5] A favoured theory is that dark matter might be constituted of "supersymmetric" particles. Supersymmetry is a theory in which all particles in our Standard Model — electrons, protons, neutrons, and so on — have a more massive "supersymmetric" partner. While there has been no experimental confirmation for supersymmetry as yet, the theory would solve a few of the gaps in our current thinking. One of supersymmetry's proposed particles would be stable, electrically neutral, and only interact weakly with the common particles of the Standard Model — all the properties required to explain dark matter.

The research paper, entitled "The non-gravitational interactions of dark matter in colliding galaxy clusters", will be published in the journal Science on 27 March 2015. 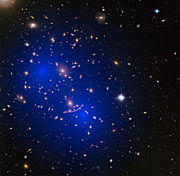 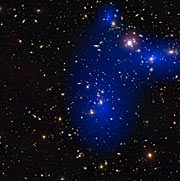 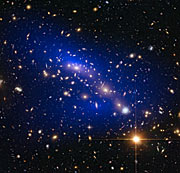 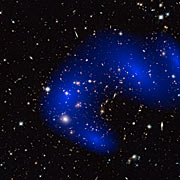 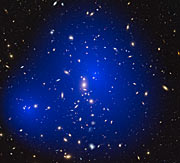