The NASA/ESA Hubble Space Telescope was used to conduct a three-year study of the crowded, massive and young star cluster Westerlund 2. The research found that the material encircling stars near the cluster’s centre is mysteriously devoid of the large, dense clouds of dust that would be expected to become planets in a few million years. Their absence is caused by the cluster’s most massive and brightest stars that erode and disperse the discs of gas and dust of neighbouring stars. This is the first time that astronomers have analysed an extremely dense star cluster to study which environments are favourable to planet formation.

This time-domain study from 2016 to 2019 sought to investigate the properties of stars during their early evolutionary phases and to trace the evolution of their circumstellar environments [1]. Such studies had previously been confined to the nearest, low-density, star-forming regions. Astronomers have now used the Hubble Space Telescope to extend this research to the centre of one of the few young massive clusters in the Milky Way, Westerlund 2, for the first time.

Astronomers have now found that planets have a tough time forming in this central region of the cluster. The observations also reveal that stars on the cluster’s periphery do have immense planet-forming dust clouds embedded in their discs. To explain why some stars in Westerlund 2 have a difficult time forming planets while others do not, researchers suggest this is largely due to location. The most massive and brightest stars in the cluster congregate in the core. Westerlund 2 contains at least 37 extremely massive stars, some weighing up to 100 solar masses. Their blistering ultraviolet radiation and hurricane-like stellar winds act like blowtorches and erode the discs around neighbouring stars, dispersing the giant dust clouds.

“Basically, if you have monster stars, their energy is going to alter the properties of the discs,” explained lead researcher Elena Sabbi, of the Space Telescope Science Institute in Baltimore, USA. “You may still have a disc, but the stars change the composition of the dust in the discs, so it’s harder to create stable structures that will eventually lead to planets. We think the dust either evaporates away in 1 million years, or it changes in composition and size so dramatically that planets don’t have the building blocks to form.”

Westerlund 2 is a unique laboratory in which to study stellar evolutionary processes because it’s relatively nearby, is quite young, and contains a rich stellar population. The cluster resides in a stellar breeding ground known as Gum 29, located roughly 14 000 light-years away in the constellation of Carina (The Ship’s Keel). The stellar nursery is difficult to observe because it is surrounded by dust, but Hubble’s Wide Field Camera 3 can peer through the dusty veil in near-infrared light, giving astronomers a clear view of the cluster. Hubble’s sharp vision was used to resolve and study the dense concentration of stars in the central cluster.

“With an age of less than about two million years, Westerlund 2 harbours some of the most massive, and hottest, young stars in the Milky Way,” said team member Danny Lennon of the Instituto de Astrofísica de Canarias and the Universidad de La Laguna. “The ambient environment of this cluster is therefore constantly bombarded by strong stellar winds and ultraviolet radiation from these giants that have masses of up to 100 times that of the Sun.”

Sabbi and her team found that of the nearly 5000 stars in Westerlund 2 with masses between 0.1 and 5 times the Sun’s mass, 1500 of them show dramatic fluctuations in their luminosity, which is commonly accepted as being due to the presence of large dusty structures and planetesimals. Orbiting material would temporarily block some of the starlight, causing fluctuations in brightness. However, Hubble only detected the signature of dust particles around stars outside the central region. They did not detect these dips in brightness in stars residing within four light-years of the centre.

“We think they are planetesimals or structures in formation,” Sabbi explained. “These could be the seeds that eventually lead to planets in more evolved systems. These are the systems we don’t see close to very  massive stars. We see them only in systems outside the centre.”

Thanks to Hubble, astronomers can now see how stars are accreting in environments that are like the early Universe, where clusters were dominated by monster stars. So far, the best known nearby stellar environment that contains massive stars is the starbirth region in the Orion Nebula. However, Westerlund 2 is a richer target because of its larger stellar population.

“Westerlund 2 gives us much better statistics on how mass affects the evolution of  stars, how rapidly they evolve, and we see the evolution of stellar discs and the importance of stellar feedback in modifying the properties of these systems,” said Sabbi. “We can use all of this information to inform models of planet formation and stellar evolution.”

This cluster will also be an excellent target for follow-up observations with the upcoming NASA/ESA/CSA James Webb Space Telescope, an infrared observatory. Hubble has helped astronomers identify the stars that have possible planetary structures. With the Webb telescope, researchers will be able to study which discs around stars are not accreting material and which discs still have material that could build up into planets. Webb will also study the chemistry of the discs in different evolutionary phases and watch how they change, to help astronomers determine what role the environment plays in their evolution.

“A major conclusion of this work is that the powerful ultraviolet radiation of massive stars alters the discs around neighbouring stars,” said Lennon. “If this is confirmed with measurements by the James Webb Space Telescope, this result may also explain why planetary systems are rare in old massive globular clusters.” 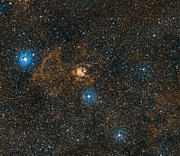