The Hubblecast has been highly commended in the 2011 MEDEA awards. An international panel of educational and media experts judged that the Hubblecast was among the best entries in this European competition that recognises innovation and good practice in the use of media in education.

There were 115 entries from 28 countries. Nine finalists were chosen, with a further 13 — including the Hubblecast — highly commended by the jury.

The Hubblecast’s Dr J (aka Dr Joe Liske) is no stranger to the MEDEA awards. In 2009, Eyes on the Skies, an hour-long documentary presented by Dr J won the Special Jury Award at the MEDEA Awards. Eyes on the Skies celebrates the 400th anniversary of the invention of the telescope and the International Year of Astronomy.

The MEDEA Awards are supported by the Lifelong Learning Programme of the European Commission through the MEDEA2020 project. 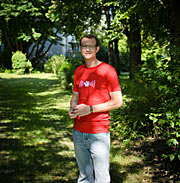