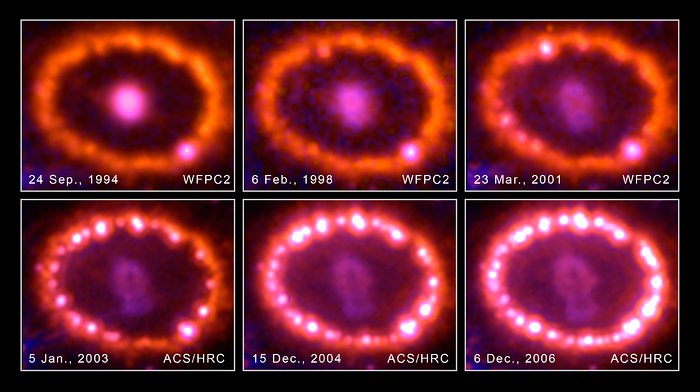 This photo album of images from NASA/ESA Hubble Space Telescope shows a ring of gas beginning to glow around an exploded star.

The stellar blast, called Supernova 1987A, was first spotted 20 years ago. The explosion is one of the brightest supernova blasts in more than 400 years. Hubble began watching the blast's aftermath shortly after it was launched in 1990.

The growing number of bright spots on the ring was produced by an onslaught of material unleashed by the blast. The shock wave of material is slamming into the ring's innermost regions, heating them up, and causing them to glow. The ring, about a light-year across, was probably shed by the star about 20,000 years before the star exploded.

Astronomers detected the first bright spot in 1997, but now they see dozens of spots around the ring. Only Hubble can see the individual bright spots. In the next few years, the entire ring will be ablaze as it absorbs the full force of the crash. The glowing ring is expected to become bright enough to illuminate the star's surroundings, providing astronomers with new information on how the star expelled material before the explosion.

The bright spot that appears to be on the ring at lower right is actually a foreground star. Supernova 1987A is 163,000 light-years away in the Large Magellanic Cloud.

The images were taken between 1994 and 2006 with Hubble's Wide Field Planetary Camera 2 and Advanced Camera for Surveys.