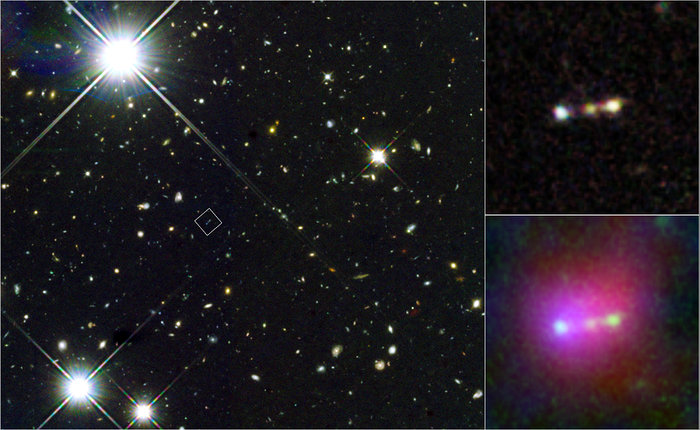 This image of a giant primordial bubble of gas, dubbed "Himiko" (after the queen of ancient Japan), is assembled from Hubble, Subaru, and Spitzer data. The left panel shows the field around Himiko, as viewed by Hubble. The position of Himiko is marked with a square.

The right panels show close-up views of the Hubble image (top) and a combination of Hubble, Subaru, and Spitzer images (bottom). In the Hubble image, infrared wavelengths captured by Hubble's Wide Field Camera 3 at 0.98, 1.25, and 1.6 microns are represented by blue, green, and red, respectively. In the Hubble/Subaru/Spitzer image, the combination of three Hubble infrared bands is green, while Lyman-alpha emission captured by Subaru Suprime-Cam and infrared 3.6 micron taken by the Spitzer Infrared Array Camera are presented with blue and red, respectively.