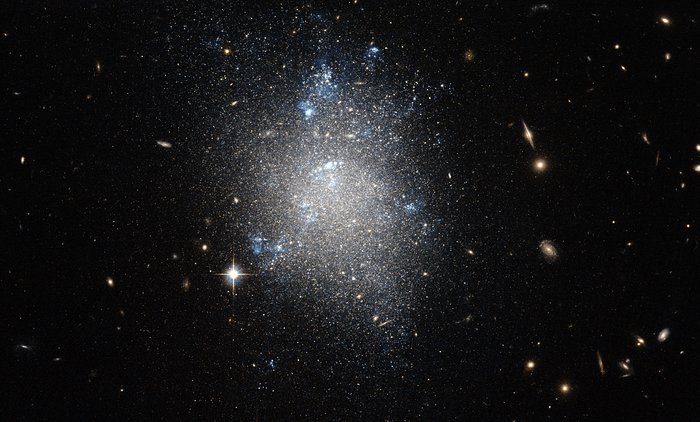 The constellation of Ursa Major (The Great Bear) is home to Messier 101, the Pinwheel Galaxy. One of the biggest and brightest spiral galaxies in the night sky, Messier 101 is also the subject of one of Hubble's most famous images (heic0602). Like the Milky Way, Messier 101 is not alone, with smaller dwarf galaxies in its neighbourhood.

NGC 5477, one of these dwarf galaxies in the Messier 101 group, is the subject of this image from the NASA/ESA Hubble Space Telescope. Without obvious structure, but with visible signs of ongoing starbirth, NGC 5477 looks much like an archetypal dwarf irregular galaxy. The bright nebulae that extend across much of the galaxy are clouds of glowing hydrogen gas in which new stars are forming. These glow pinkish red in real life, although the selection of green and infrared filters through which this image was taken makes them appear almost white.

The observations were taken as part of a project to measure accurate distances to a range of galaxies within about 30 million light-years from Earth, by studying the brightness of red giant stars.

In addition to NGC 5477, the image includes numerous galaxies in the background, including some that are visible right through NGC 5477. This serves as a reminder that galaxies, far from being solid, opaque objects, are actually largely made up of the empty space between their stars.

This image is a combination of exposures taken through green and infrared filters using Hubble's Advanced Camera for Surveys. The field of view is approximately 3.3 by 3.3 arcminutes.