Star clusters are among the most visually alluring and astrophysically fascinating objects in the sky. One of the most spectacular nestles deep in the southern skies near the Southern Cross in the constellation of Crux.

The Kappa Crucis Cluster, also known as NGC 4755 or simply the "Jewel Box" is just bright enough to be seen with the unaided eye. It was given its nickname by the English astronomer John Herschel in the 1830s because the striking colour contrasts of its pale blue and orange stars seen through a telescope reminded Herschel of a piece of exotic jewellery.

Open clusters [1] such as NGC 4755 typically contain anything from a few to thousands of stars that are loosely bound together by gravity. Because the stars all formed together from the same cloud of gas and dust their ages and chemical makeup are similar, which makes them ideal laboratories for studying how stars evolve.

The position of the cluster amongst the rich star fields and dust clouds of the southern Milky Way is shown in the very wide field view generated from Digitized Sky Survey 2 data. This image also includes one of the stars of the Southern Cross as well as part of the huge dark cloud of the Coal Sack [2].

The Jewel Box may be visually colourful in images taken on Earth, but observing from space allows the NASA/ESA Hubble Space Telescope to capture light of shorter wavelengths than can be seen by telescopes on the ground. This new Hubble image of the core of the cluster represents the first comprehensive far ultraviolet to near-infrared image of an open galactic cluster. It was created from images taken through seven filters, allowing viewers to see details never seen before. It was taken near the end of the long life of the Wide Field Planetary Camera 2 — Hubble's workhorse camera up until the recent Servicing Mission, when it was removed and brought back to Earth. Several very bright, pale blue supergiant stars, a solitary ruby-red supergiant and a variety of other brilliantly coloured stars are visible in the Hubble image, as well as many much fainter ones. The intriguing colours of many of the stars result from their differing intensities at different ultraviolet wavelengths.

Another new image taken with the Wide Field Imager (WFI) on the MPG/ESO 2.2-metre telescope at ESO's La Silla Observatory in Chile shows the cluster and its rich surroundings in all their multicoloured glory. The large field of view of the WFI shows a vast number of stars. Many are located behind the dusty clouds of the Milky Way and therefore appear red [3].

The FORS1 instrument on the ESO Very Large Telescope (VLT) allows a much closer look at the cluster itself. The telescope's huge mirror and exquisite image quality have resulted in a brand-new, very sharp view despite a total exposure time of just 5 seconds. This new image is one of the best ever taken of this cluster from the ground.

The huge variety in brightness of the stars in the cluster exists because the brighter stars are 15 to 20 times the mass of the Sun, while the dimmest stars in the Hubble image are less than half the mass of the Sun. More massive stars shine much more brilliantly. They also age faster and make the transition to giant stars much more quickly than their faint, less-massive siblings.

The Jewel Box cluster is about 6400 light-years away and is approximately 16 million years old.

[1] Open, or galactic, star clusters are not to be confused with globular clusters — huge balls of tens of thousands of ancient stars in orbit around our galaxy and others. It seems that most stars, including our Sun, formed in open clusters.

[2] The Coal Sack is a dark nebula in the Southern Hemisphere, near the Southern Cross, that can be seen with the unaided eye. A dark nebula is not the complete absence of light, but an interstellar cloud of thick dust that obscures most background light in the visible.

[3] If the light from a distant star passes through dust clouds in space the blue light is scattered and absorbed more than the red. As a result the starlight looks redder when it arrives on Earth. The same effect creates the glorious red colours of terrestrial sunsets. 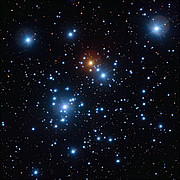 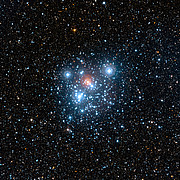 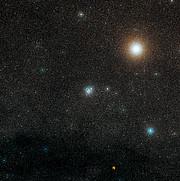 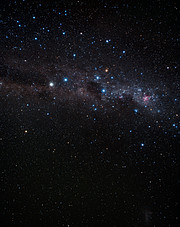 PR Video heic0913a
Zooming in on the Jewel Box